In the region of over 5,000 people visited New Hall Farm, near Rathmell, for NSA North Sheep 2019, and in terms of number of visitors and trades stand, it was described my many as one of the best yet. With a Young Chairman, a multi-generational family farm, the local Young Farmers stock judging, local school children educated and many young people attending, it was also an event which saw the next generation of the sheep industry in the North of England very much coming to the fore.

The major sponsor was Agrilloyd, with mainline sponsors; AHDB, British Wool, I’Anson, Beltex, Booths, CCM Auctions, MSD, Crystalyx, Roxan.  The Farm Tour was supported by Townson Tractors, Watson Trailers and Countrystyle Meats. Plus, many other section sponsors, a huge thank you for all your support.

The Frankland family are admired for their tremendous stockmanship and together, the family had worked tirelessly to present what was a tremendous showcase of sheep and an excellent example of a commercial Yorkshire farming enterprise.

Speaking after the day, Richard Frankland, said: “We have all really enjoyed hosting this event and have been overwhelmed with the response and feedback from everyone. North Sheep would certainly not have been possible without the support from local friends and neighbours, and on behalf of the entire family, I would like to thank them all very much indeed.”

With the day focusing on key issues, including sheep exports, share farming, sheep health and welfare, and the future for Environmental Land Management Schemes, locals and farmers from across the region and beyond experienced a day of knowledge transfer, discussion and debate whilst witnessing the latest industry trends and equipment.

The seminars were packed and from the discussion, it was apparent from the seminar on ‘the Future for Environmental Land Management Schemes’ that farmers are looking for simpler national based schemes with an outcome- based approached. The speakers were all keen to highlight that ‘productivity and environment improvements need to go hand in hand’ and that there are opportunities there for farmers, but they need to be grasped.

Shearing is a vital industry skill and, in a competition, sponsored by British Wool, there was a strongly fought battle of the counties, which resulted in a first for Lancashire YFC, Cumbria YFC scooping second place and Yorkshire YFC achieving third.

NSA North Sheep is organised by the National Sheep Association (NSA) – a very important industry body, the voice of the sheep industry and one which deals with policy and politics at the very highest of levels. Giving feedback after the event, Thomas Carrick, NSA North Sheep Chairman, said:

“I am over the moon. I would really like to thank the Frankland family for their hard work and commitment to this year’s event, and the stock especially are a credit to the hard work of the entire family. This is a family farm, and family farms such as this are very much at the core of the sheep industry. This was a very good day out and the highlight, for me, was the Farm Tour.

“There was a huge amount of social support from local people in the area. The seminars gave fantastic business advice and as anticipated, people were really there to look, listen and learn, and this has never been so evident through the seminars. Across the day, the sheep were consistent, well looked after and of the very highest quality – the cross-terminal sires, especially, produce really high-end butcher’s lambs.

For many who attended they were there to see a showcase farm, and over 3,000 people took part in the farm tours. This gave them the opportunity to see first-hand the results of tremendous stockmanship – which can only be described as some of the very highest calibre of sheep and cattle in this part of Yorkshire – and to learn about the practical aspects, such as breeding and feeding regimes. All along with enjoying locally produced refreshments and food with panoramic views of this very special part of the country.

In his opening address, Bryan Griffiths, NSA Chairman, said: “The Northern Region is a special and important part of the country for the NSA. I am delighted to see that all sectors of the industry were represented across the Breeds Societies and trade stands, it was attended by Sheep Farmers from all areas - not just the Northern Region but the United Kingdom.”

Winners of the Best Breeder Stand:

Organised on behalf of the NSA Northern Region Committee, the ‘Next Generation Shepherd’ competition provided young shepherds and shepherdesses with the chance to portray their shepherding skills across five different areas and was kindly sponsored by Carrs Billington.

Representing all counties within the Northern region, 15 entrants took part. This is a challenging competition and the feedback from the judges was that “the calibre of entrants was exceptional and demonstrated that the industry has some very capable young shepherds”. This is, of course, something which is obviously key to the long-term sustainability of the future of the industry.

So, to conclude, Thomas, who encouraged people to come to NSA North Sheep to look, listen and learn, this showcase sheep farming event demonstrated the strength of the industry:

“When I first met the Frankland family, their aim was to make this the best North Sheep ever seen and seeing today the true size of this event and the number of people that attended is very much statement of the importance of this event to the industry. It was great to see so many farmers getting off their own farms to enjoy a day out, listen to the “crack” and see this fantastic farm. NSA North Sheep is a feel-good event and a happy, social occasion for the farming industry.

“I would like to reiterate a big thank you to those who made the day possible; the sponsors, committee and the volunteers.” 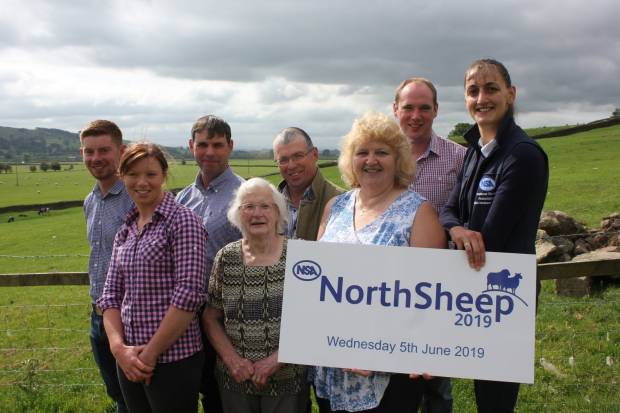