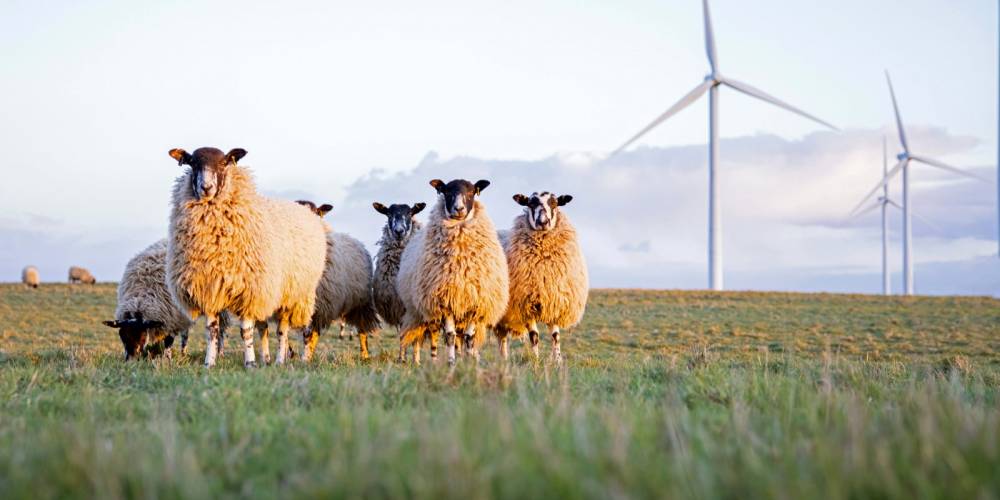 Can –and should – UK sheep farming contribute to net zero?

This article was featured in the October/November 2021 edition of NSA's Sheep Farmer magazine. The magazine is an exclusive NSA membership benefit, packed with technical advice for the sector. Find out more about membership here.

Net zero by 2050. Regardless of interim targets set by others, that’s the ultimate cut-off, enshrined in law, by which the UK must not produce more greenhouse gas than it removes from the atmosphere.

The main goal of COP26 in Glasgow in November is to ensure all countries achieve such targets and keep the world within 1.5°C of warming. Agriculture will be one of many sectors being discussed. Not just because it produces emissions (something many UK farmers consider to be exaggerated), but also because grassland and non-cropped habitat such as hedgerows remove carbon dioxide (CO2 ) from the atmosphere (something that is often overlooked).

NSA has focused its ‘Countdown to COP’ efforts at promoting the already positive contribution of UK sheep farming to climate change mitigation, as well as highlighting sustainability as being more holistic than just reducing emissions.

But if we do consider emission targets on their own, what do they mean for UK sheep farmers? After all, we are just one sector of agriculture in a country that makes up less than 1% of global emissions. Do we have a role? And if so, will it really make a difference?

NSA Chief Executive Phil Stocker says: “UK sheep farmers are not going to solve global warming on their own, but the dangers are such that everyone needs to play their part. And it will do our reputation no harm to be seen to be doing what we can to mitigate the risks.

“I don’t support any suggestions to reduce the national flock to ‘cool’ the climate. Sustainable food security is equally important and sheep production based on grass could hardly be more sustainable. But there are efficiency improvements that can reduce our carbon footprint to work towards net zero.

“The other way we can help is through sequestration – locking more carbon into on-farm organic materials. Increasing organic matter in soils to store more carbon also makes soils more biologically active and functional, and increasing hedgerow mass stores more carbon and provides shelter and shade for stock and opportunities for wildlife.

“Sheep farming as it stands now can be argued to be good for the planet in a number of ways, and grassland is still one of the most undervalued and multifunctional crops/habitats on earth. It is about fine tuning rather than change.

“But while there is plenty sheep farmers can do, action is also needed by policymakers to ensure a supportive and honest policy framework – one that recognises grassland in the same way trees are recognised. Integration of trees into farmland has a role, but mass afforestation is something else and policymakers need to be very cautious about taxation and offsetting policies that damage our pastoral base without really understanding the end result.”

The UK leaving the EU Common Agricultural Policy combined with ambitious emissions targets means the bulk of the post-Basic Payment Scheme farm support budget will be targeted heavily in favour of the environment. With detail on specific plans for all four UK nations not yet available, Defra’s Janet Hughes says BPS will be replaced with initiatives to support Can –and should – UK sheep farming contribute to net zero? farmers to make the changes required to reduce emissions and increase CO2 storage on their farm.

She says: “Many changes need not be large-scale. Livestock farmers can reduce agricultural emissions by, for example, developing flock health plans, using precision feeding techniques and introducing trees to pasture. “By taking action to reduce emissions and store more carbon, sheep farmers will be making an important contribution. All farms, whatever their size, can make a positive impact to achieve net zero.”

For UK ruminant agriculture, the issue is mostly around methane emissions – but because methane is a less long-lived greenhouse gas than CO2 (see panel) it is argued a 10% reduction over 30 years is equivalent to methane net zero.

Independent consultant Liz Genever agrees this is achievable through flock efficiencies rather than reducing stock numbers. She encourages sheep farmers to focus on fertility, ewe mature weight and lamb growth rates, as methane production is driven by feed intake, which in turn is driven by bodyweight (heavier animals eat more) and days on farm.

Dr Genever says: “Ewe efficiency is crucial. They should be rearing 65% of their bodyweight to the point of weaning – so a flock with 70kg ewes and rearing 1.7 lambs should be weaning lambs at 90 days at an average weight of 27kg (1.7 x 27 divided by 70).

“Ewes are typically getting bigger and some farmers are switching breeds to counteract this. But it comes back to the weight lambs need to be weaned at to justify the extra weight of the ewe. Weigh some of your own ewes to see where the flock average is and compare this with weaning weights.

“Lamb growth rates are also key and influenced by a range of factors – genetics, health and nutrition. The industry targets for lowland flocks are a group average of 20kg at eight weeks and 30kg at an adjusted 90 days of age. The aim is to achieve this with minimal feed use, using grass and forage.

“Fewer days on farm means lower emissions, but this needs to be balanced with feed inputs. Ruminants can utilise a range of feeds and forages, and strategic use of home-grown or bought-in feeds can be justified if it cost-effectively accelerates gain. But monitor eight-week and weaning weights against industry targets to ensure production is efficient.”

Louise McNicol, a PhD student at Bangor University who is focused on identifying strategies for Welsh farm to achieve net zero, says research consistently shows what is possible.

“Strategies will vary and this isn’t necessarily based on farm size or type, but revolves around efficiency. Optimising nutrition, grassland management, genetic merit and animal health could all reduce emissions,” she says.

“Reducing the number of unproductive animals and achieving target weights faster, so stock is on farm for less time, will mean lower emissions of methane and nitrous oxide. It can also mean less land is required to maintain the current level of output, leaving more land available for offsetting strategies such as agroforestry. Given that some emissions are unavoidable, offsetting will play an important role.

“Although UK agriculture contributes relatively little to emissions on a global scale, it still contributes significantly to the UK total. And with the net zero target legislated in the UK, doing nothing is not an option.”

Looking ahead to COP26, Mr Stocker says: “Climate change and global sustainability is not a tide we can swim against, and neither should we want to because we hold some of the keys and know climate change and extreme weather conditions will make our lives far more difficult.

“NSA will continue to fight for carbon footprinting methods to be more accurate and meaningful, and to always consider wider sustainability metrics. In particular, we will push for the multifunctional role of grass to be better understood, the inclusion of whole food chains in footprinting tools, and acceptance of the misleading way that methane and carbon equivalents are taken account of. We then need to strive to reduce our footprints through efficiency measures.

“Finally, we need incentives and reward for storing carbon on our farms, and where possible to consider renewable energy production on farms. These measures, along with tempering rampant enthusiasm for planting our grasslands with trees, would mean UK sheep farmers may not just find net zero achievable, but deliver on a more far-reaching assessment of sustainability.