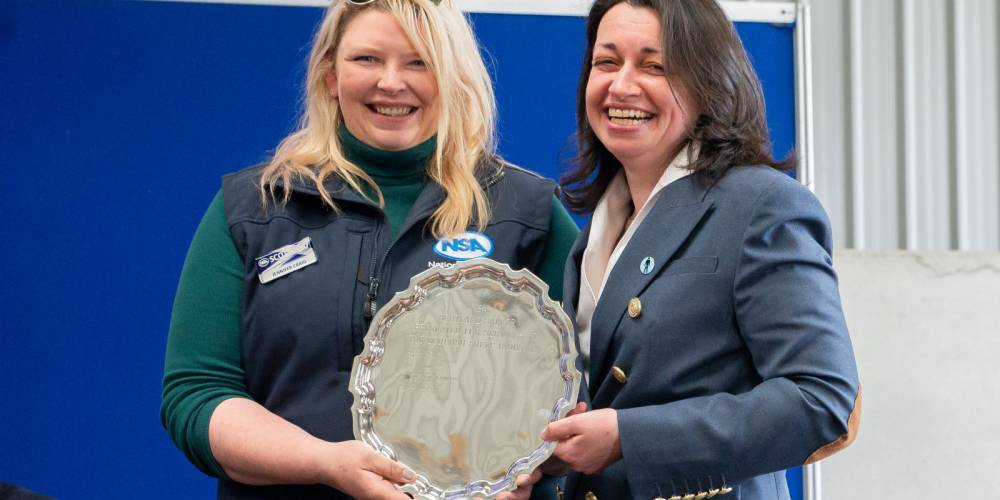 From no fewer than seven nominations, NSA Scotland Chair Jen Craig has been announced as this year’s recipient of the NSA Scotland Silver Salver which is awarded annually in recognition of an outstanding contribution to the Scottish sheep industry. The award was presented at last week’s successful NSA Scot Sheep event held by kind permission of Robert and Hazel McNee, at Over Finlarg, Tealing.

Despite having not been awarded since 2019 due to the Covid pandemic, NSA Scotland committee members came to the decision this year after a series of votes which named Jen as the deserving recipient. Jen who is currently in her fourth and final year of being NSA Scotland Chair, has steered the organisation in Scotland through challenges such as Brexit and Covid, whilst ably running the family farm, Normangill at Crawford. NSA Scotland would like to congratulate Jen on this well-earned award and would also like to thank her for her hard work and commitment since taking on the role of NSA Scotland Chair.

Jen comments: “Thank you to NSA Scotland for awarding me the Silver Salver this year. It took me completely by surprise and I would like to thank all for their support these past few years – I am seriously impressed you managed to keep it a secret from me! I would also like to thank Hazel and Robert and all of the NSA Scot Sheep organising committee for their hard work and dedication to make this year’s event such a success. Despite many setbacks and hard decisions to postpone, I am delighted to say that it was certainly worth the wait!”