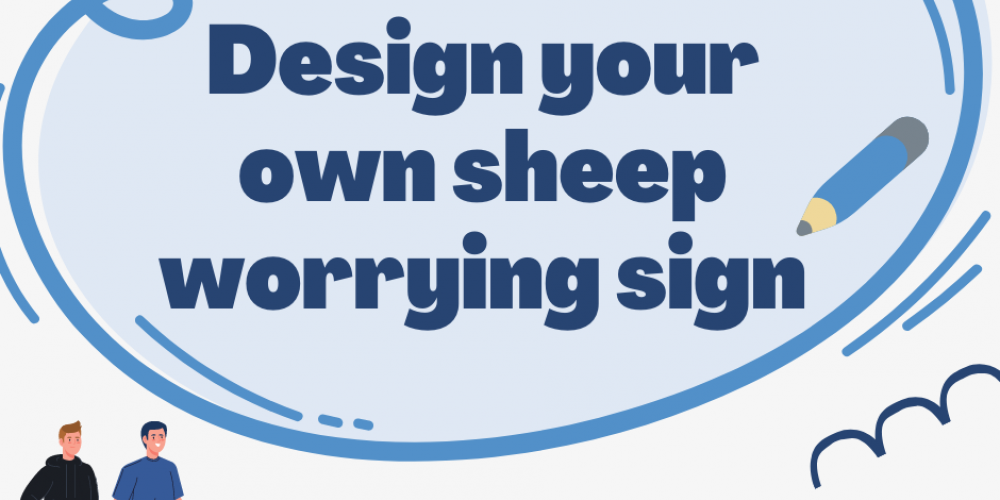 As part of its continued work to highlight the serious and devastating issue of sheep worrying by dogs NSA is excited to launch a new children’s competition that could help raise awareness to dog walkers and others enjoying the countryside.

NSA is challenging children in three age groups; Under eight, eight to 12 and 13 to 16, to design a sign suitable to be displayed on fence posts and around farmland reminding dog walkers to keep their pet on a lead when walking in areas where sheep may be present.

Sheep worrying by dogs is a serious issue for sheep farmers often resulting in injuries and even death of affected sheep. The stress experienced by sheep following chasing or physical attacks can also have devastating consequences with pregnant sheep at risk of miscarrying their unborn lambs. And it is not just the physical injuries to sheep that make the issue of serious concern to the sheep sector with farmers themselves reporting that their mental wellbeing has been compromised due to the worry of potential attacks happening or over those that have already taken place.

NSA Communications Officer Katie James comments: “For many years, NSA, as well as many other farming bodies have highlighted the seriousness of this issue and has taken actions such as supplying free farm signs to sheep farmers to try and alert dog walkers of the risk posed to sheep and other livestock from their pet if allowed to run off lead. Unfortunately NSA is aware that too often these signs are ignored.

“But it is hard to ignore a plea from a child. We therefore hope our new competition could create a resource that catches the public’s eye and shows them, through the eyes of children, the devastation that could take place if they fail to keep their dogs under control and on a lead when near livestock. All at NSA look forward to receiving entries from farm kids who may have been themselves affected by the issue but also from any children keen to help attacks on sheep from happening.”

To assist children wishing to take part in the competition, NSA has produced a downloadable template for children to use for their design either through drawing and colouring by hand or by using their IT design skills. The template can be downloaded from the NSA website and once completed can be emailed to enquiries@nationalsheep.org.uk or posted to National Sheep Association, The Sheep Centre, Malvern, Worcestershire, WR13 6PH. Designs simply drawn on A4 paper will also be accepted. Entries close on Wednesday 20th October 2021.

The winning designer will receive some Halloween goodies and will have their sign made into a downloadable resource that sheep farmers can use to try and prevent sheep worrying attacks by dogs from taking place on their farms.