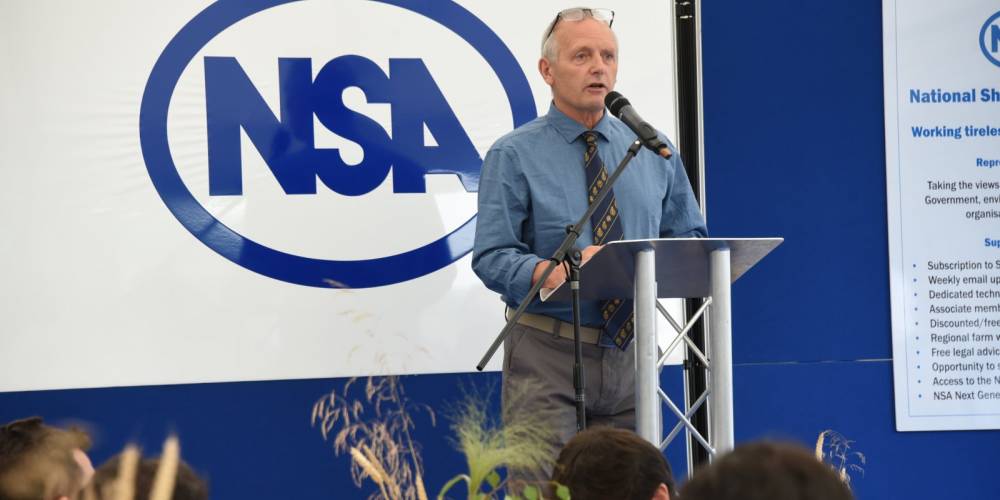 At its flagship Sheep Event today (Wednesday 27th July), the National Sheep Association (NSA) called for sheep farming to be recognised for all it delivers – not least for its incredible interconnectedness and multifunctionality.

Speaking specifically about the risk of ‘silo thinking’ by policymakers, NSA Chief Executive Phil Stocker, said: “We encouragingly hear talk of land-sharing being the ideal – but then go on to talk about payments for farms to take land out of production. We still hear that ‘less productive land’ should become ‘habitat land’, without recognising that habitat for butterflies, birds and much more comes from the farming system, not from land set aside for nature. Most sheep farms have and want both.

“There will be benefit from rewetting areas and for the right tree in the right place but, in addition, we need to recognise the importance of the farming system itself operating in a multifunctional way – for food production, nature and the climate. The work of NSA and others means grassland is now more widely recognised than it was – but we still face a serious threat that ‘it makes sense’ for lower quality, cheaper agricultural land (mainly grassland) to be destined for tree planting and habitat creation – damaging a truly multifunctional farming system and swapping it for something that negatively changes the landscape, ecology, rural communities and culture forever.”

Mr Stocker’s comments were made at the NSA Sheep 2022 Welcome Address, where he shared a platform with Janet Hughes, Defra’s Programme Director for the Future Farming & Countryside Programme, and Jonathan Statham, Animal Health & Welfare Board for England (AHWBE) Chair and Harper & Keele Veterinary School Professor of Sustainable Livestock Health & Welfare.

With Ms Hughes and her team developing the new Sustainable Farming Incentive in England, alongside similar schemes in the devolved nations, and Professor Statham being deeply involved in Defra’s new Animal Health & Welfare Pathway, the focus of the Welcoming Address was to look ahead to how sheep farmers will be supported as the UK transitions away from the EU Common Agricultural Policy.

Mr Stocker said: “NSA is largely supportive of the new schemes and packages being developed and on offer. But I cannot let this moment pass without putting on record that NSA sees the launch of Pathway as a real victory. NSA proposed such a scheme in 2012 and received virtually no support. In fact, we were given very short shrift when we presented the idea to the AHWBE and others as far back as 2013. We are therefore very proud that NSA’s vision 10 years ago is coming to fruition and that, as an organisation, we are heavily involved in the design of the sheep elements of Pathway.

“I know how hard both Janet and Jonathan are working and how tirelessly committed they are to getting the schemes right. But I also know our farmers are working hard too and, in this era of change, they are doing their day jobs (often with less help than they would have had in the past) and then coming back in at night and having to keep up with Defra announcements, updates and engagement, trade deal development, new assurance standards, prepare for inspections, and deal with a host of additional red tape.

“It is easy to forget that pretty much all sheep farms are small and medium sized businesses that don’t have the luxury of compliance officers, animal welfare officers, general managers or interns to pass work on to. Most people do all this themselves and, while NSA does what it can to support members, not least through events like today, I would like to take this opportunity to recognise what you all do, day in day out. I believe the opportunities ahead outweigh the challenges and there is a positive future for those willing to grasp it.”

The Welcome Address from Mr Stocker, Ms Hughes and Professor Statham was the first of two official speeches at NSA Sheep 2022, with Defra Minister Victoria Prentis addressing visitors and taking questions in the afternoon.