Given the success of the 2018/2019 raffle, NSA Scottish Region immediately launched efforts to repeat it – selling tickets in autumn 2019 with the intention of beating it’s previous record of more than 6,200 tickets purchased before the Royal Highland Show 2020. However, this was not to be – as Covid-19 hit and events/face-to-face opportunities to sell tickets were brought to an abrupt halt. After much deliberation, the decision was taken to cancel the raffle. The small number of people who purchased a ticket were contacted and offered a refund. For anyone not taking up the offer of a refund, their £1 raffle ticket purchase was converted into a donation to RSABI in September 2021. No money was retained by NSA Scottish Region.

The winner was Gordon Rennie, who farms with his family at Newmill Keith, Aberdeenshire, running 1,000 sheep and 60 cattle. He was delighted to win the prize – and given that his daughter, Zoey, bought the winning ticket on his behalf, it was only appropriate she went to collect it a month or so later. Zoey Rennie had purchased the ticket at the Royal Highland, just days before the draw was held, where she had been part of a professional shearing display using a bicycle-powered shearing set-up in the NSA marquee. Accompanied by her dog Mac, she collected the prize from AM Philip Agritech, the family’s local authorized Honda dealer. Click here for more.

In addition to NSA Scottish Region selling tickets, to raise money to help fund its work providing a voice for the Scottish sheep sector, the opportunity was also given to sheep breed societies to sell tickets and raise money for their own efforts. All NSA-affiliated sheep societies were given the opportunity to sell tickets, receiving 60p back for every £1 raised, with the added incentive of the society selling the most tickets winning a Honda EU22 generator. This was the Cheviot Sheep Society. Click here for more. Both the quad bike and generator prizes were only possible due to the incredibly generous sponsorship of Honda (UK). 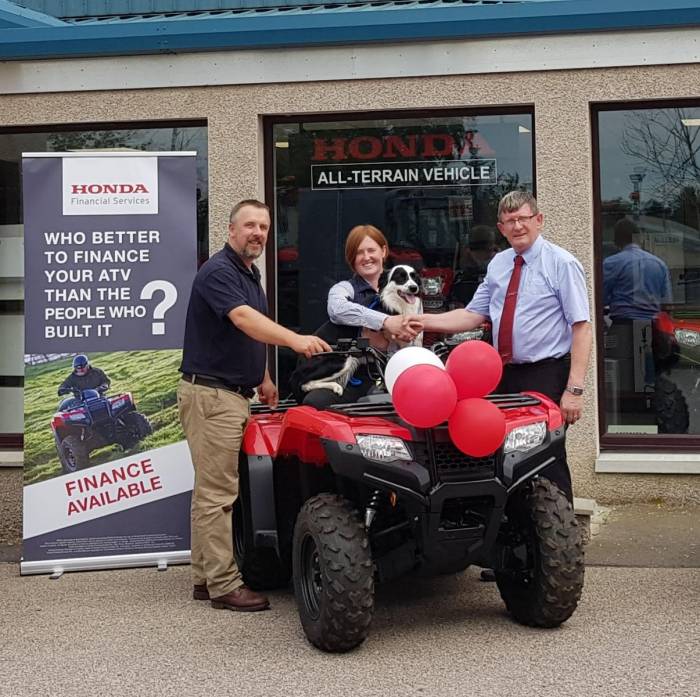 Zoey Rennie collecting the Honda quad bike won in the 2018/2019 raffle.
National Sheep Association | The Sheep Centre | Malvern | Worcestershire | WR13 6PH
Tel: 01684 892661 Fax: 01684 892663
NSA is a Company Limited by Guarantee, registered in England (No. 37818). It is a registered charity in England and Wales (No. 249255) and in Scotland (No. SCO42853). NSA is VAT registered (No. 273 3469 44). NSA complies fully with the General data protection Regulation (GDPR). Contact NSA to request our privacy policy, to raise queries or concerns regarding GDPR, or to unsubscribe from NSA mailing lists. National Sheep Association is an organisation which represents the views and interests of sheep producers throughout the UK. NSA is funded by its membership of sheep farmers and it activities involve it in every aspect of the sheep industry.
your business your future