A high entry of quality breeding sheep attracted a good number of buyers to Exeter's Livestock centre on Wednesday 14th August for NSA South West Regions ram sale. Breeds were sold through four selling rings by auctioneers Kivells. Please see a detailed report for each of the sale rings below:

A good entry of 139 Texel rams and 19 females for the Annual NSA Ram sale saw a strong trade for the best and a selective trade for the rest selling to a 75% clearance. Top of the day was 1000gns for the reserve Champion “Moortown Braveheart” by Cambwell Wallabrook from Robert & Rebecca Jordan of Chagford who were also rewarded with the best pen of rams and they sold other rams to 700gns & 680gns and achieved the overall top average of £722 for six rams. Messrs FH Chave & Son of Wellington sold a tremendous quality run of Rams FROM THEIR Peacehay flock to a top of 80gns twice for sons of Clarks Wizards with others by the same sire to 800gns & 780gns. Messrs EW Quick & Sons of Crediton sold a quality consignment which met strong demand topping at 700gns three times for sons of Douganhill Whiskey Mac and Loosebeare Yahoo. Also at 700gns was “Deverill Booner” from Adrian Dufosee of Wiltshire and “Hornacott Buster” from Phil & Lesley Martyn-Uglow. Chris Ruby of Ashwater sold a smart shearling “Home Farm Bailey” at 680gns and the best of a run from Messrs RC Burrough & Sons of Axminster sold at 600gns for “Godworthy Biggles” by Cornmore Yolo. Aged rams sold to 420gns for “Plantfield Adonis” from Louise Atkins of Ashwater. Ram lambs topped at 600gns for “Loosebeare Chappie” from Messrs EW Quick & Sons with others to 300gns for Joanna Killin of Bridport. The female section which started the sale sold to tremendous demand topping at  600gns for a Millhouse shearling from Angus & Sue Howie of Meeth who sold another ET daughter by Cairness Ranger at 520gns. Other shearlings sold to 480gns, 400gns & 380gns for Messrs EW Quick & Sons and 480gns, 420gns & 400gns twice for Messrs FH Chave & Son. Ewe Lambs topped at 280gns twice for Graham Hill.

A tidy offering of crossbred rams got ring two off to a decent start with Robert Hopper of Tiverton selling strong CharTex’s to 600, 580 & 500gns (x2) followed closely by Bill Quick and family with similar at 560 & 450gns and Andy & Wendy Reed of Blackborough sold Beltex crosses at 480gns (x2). Dorset ram lambs sold to 480gns for David & Richard Rossiter of Kingsbridge as shearlings sold to 420gns for Les French of Launceston. Lleyn shearlings to 300gns (x2) for Paul & Sarah Eckett of Sturminster Newton. An increasing number of Blue Texels saw females meet with great interest and sell to 340gns twice for shearlings from Andrew Bishop and 340gns again for a shearling from Messrs Smith & Maynard of Thelbridge who also had ewe lambs at 280gns and 220gns. Blue Texel males were headed by a senior ram from Gwen Renfree of Liskeard at 510gns, as shearlings sold to 420gns for Messrs Smith & Maynard and 400gns again for Gwen Renfree who also topped the ram lambs at 380gns. Hampshires to 350gns (x3) for Henry Derryman & family of Yarcombe and Border Leicesters to 500gns and 350gns for Sue Martyn of Launceston. Suffolk’s completed the line up in ring two with a mixed show on offer selling to trade to reflect the quality. A super run from Henry Derryman and family stole the show when they soared to 700, 680 (x3), 650, 580 (x2), 550, 500 & 450gns (x3). David & Richard Rossiter took the next top price at 660gns and another three at 400gns, Robert Hopper sold his good run to 500, 450 & 420gns (x2), ST Peirce of Bristol sold his best to 500gns and Mike Waycott of Ashburton sold his to 480 & 450gns.

The Charollais started the sale in ring three and with the decision to sell females before males, trade got off to a sticky and selective start for the females whilst ram averages were up in the region of £20. The second prize shearling ewe from Carol Irwin’s Brandywells flock took the top spot of 500gns with another from the same good home at 400gns and the Champion female from Gerald Burrough of Dunkeswell made 320gns with an early ballot. Other shearling ewes sold to 280gns for John Barker and family of Wellington, 250gns for Tom Newth of Castle Cary and ewe lambs peaked at 250gns (x2) for Arthur Brown of Templecombe.

Older Charollais sold to 400gns twice for Tom Newth with 4T age rams. Quality Charollais shearlings were keenly sought after with six over £700 selling to a top of 880gns for a tremendously shapely Loosebeare Perfect son from Messrs E W Quick & Sons of Crediton who were awarded the best run of shearling rams in the pre-sale show and sold a further three rams at 700gns. The pre-sale Champion was lot 403 from Gerald Burrough’s Sheldon flock which sold at 750gns to Brian Cornish of Holcombe Rogus and the second prize shearling ram came from Robert Hopper’s Gogwell flock in Tiverton and realised 700gns also. Thirty three shearling rams sold from an entry of 45, being a similar clearance rate to last year and sold to average £500.50, up £20 on 2018.

Ram lambs met a more selective trade with a lack of lower end, volume buyers of previous years meaning just under half of those forward found new homes. Seven over 400gns selling to a joint top of 600gns shared between Carol Irwin of Kings Nympton and FA Elsworthy of Witheridge, next best at 500gns was Robert Hopper followed at 460gns by Charlie Cox of Minehead, Gerald Burrough had two at 450gns and Ben & Amelia Watts of Ashburton sold at 400gns. 43 entered, 20 sold to average £387 (up £24 on 2018).

Beltex females were topped by the champion female, a shearling from Andrew Bishops, Bishop's flock in Gloucestershire that realised 500gns to Gwen Renfree of Liskeard as Colin Roots of Warwickshire parted with second prize shearling ewe at 450gns to the same buyer. Older ewes sold to 400gns for Louise Elworthy of Crockernwell and ewe lambs peaked at 380gns again for Colin Roots.

The only aged rams forward made 500gns for Lorna Gregory of Launceston who also had a shearling at the same money. Andrew Bishop followed up his female championship success by also claiming male and overall champion with his shearling by Ardstewart Abacus that topped the sale at 920gns selling to Ben Collings of Launceston and Andrew’s next ram in made 500gns. Colin Roots sold his best shearling ram at 520gns and all but three of the 28 Beltex shearlings forward sold to average £464. Ram lambs were headed by the first prize lamb from Louise Winsor of Torrington which was the last lot through the ring but met with competitive bidding to make 600gns. Lambs averaged £373.

A smart show of 41 Non MV Rams saw the best meet a tremendous trade. Top draw Berrichon rams from Martin Yeo and family down from Yarnscombe met a cracking trade with the best topping at 900gns, others from the same good farm went to hit 600gns, 550gns, 480gns and 450gns. Bluefaced Leicester’s from B Dallyn of Parrcombe realised 350gns with others hitting 300gns, further Bluefaced Leicester’s from RHS Turner of Payhembury achieved 300gns twice with others attaining 250gns. Border Leicester’s from NF Dalgarno of Truro topped at 320gns, whilst Suffolk crosses from Reg Pedrick and family of Newton Abbot attained 300gns with others realising 280gns. 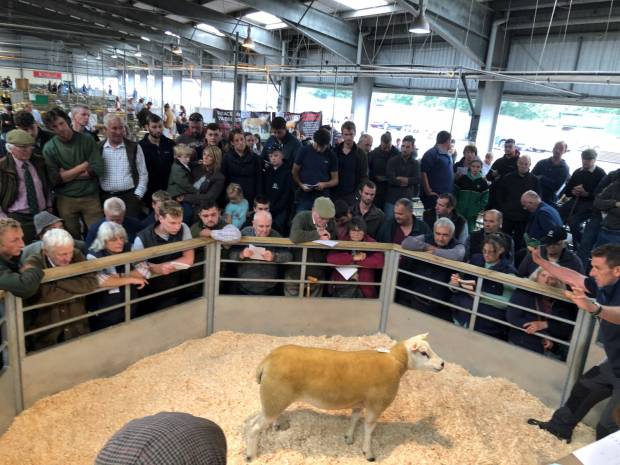 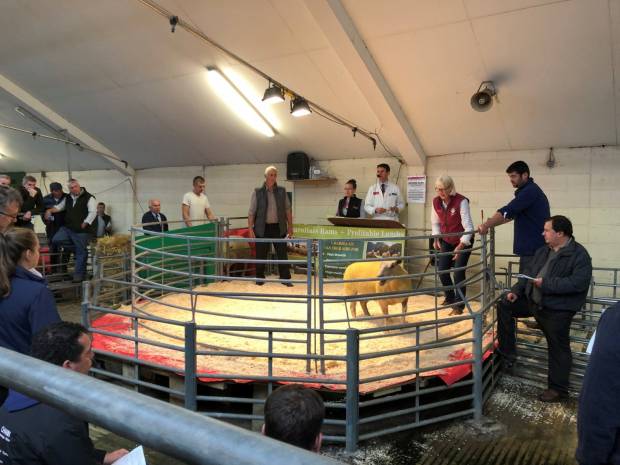